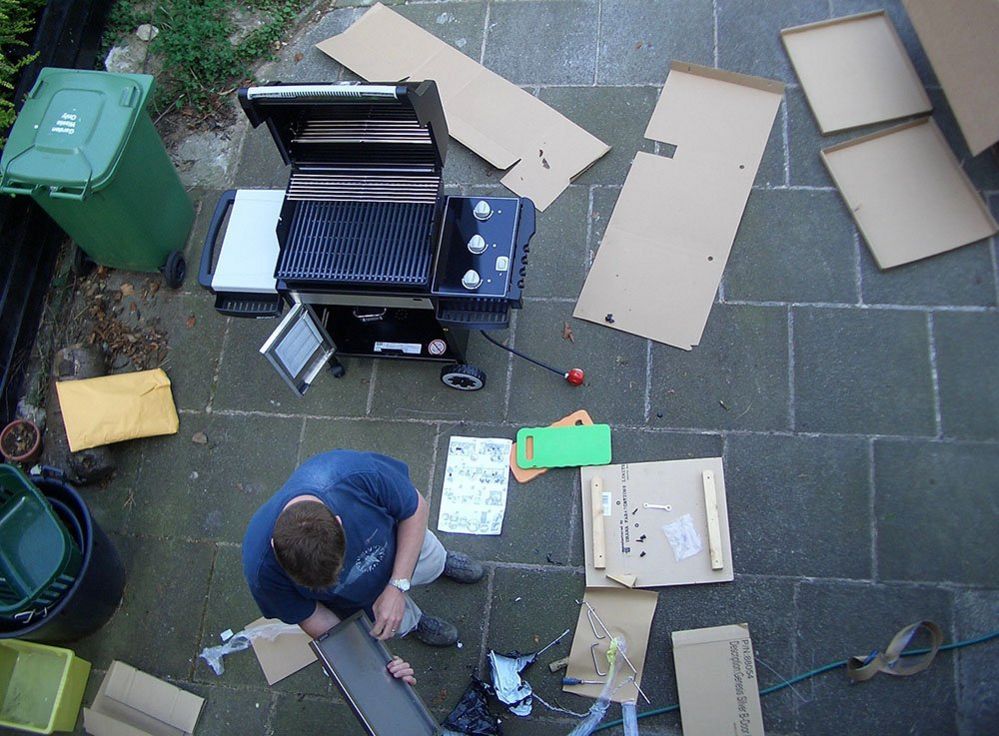 We asked our readers to send in their best pictures on the theme "under construction". Here is a selection of the photographs we received from around the world.

Jacqueline C Melling: "Spread out on the drive, the new barbecue comes together. Only one last piece and the construction will be complete. Then it will be time to test it out. Yummy yummy!"

Harald Loeffler: "During the years-long eruption of Kilauea volcano on the Big Island of Hawaii, we were fortunate to witness the lava pouring into the ocean, creating hundreds of acres of new land."

Ruth Rasbridge: "A home for some Coot chicks under construction at Kelsey Park in Beckenham, Kent, last year."

Alfred Williams: "Going Up in Mumbai. This was the view from my hotel room on a business trip. The physical construction seemed metaphorical for India in general, but don't get me started on the traffic."

Sharon Forrest: "I spotted this colourful pole-dancing scene at Blackfriars Bridge, London, during an afternoon walk."

Derek Phillpot: "Model-making after 60 years still holds a lot of pleasure for me, plus the satisfaction of achievement, when the model is finished."

Feldore McHugh: "Aberdeen Peepshow - no matter their age, no-one can resist peeping through a hole in the fence around a construction site to see what's going on!"

Martin Odino: "A nest under initial stages of its construction by a male African Golden Weaver. Photo taken while on a boat ride on the River Rufiji in Tanzania."

Eduard Yaco: "This shot was taken at Rosario Batangas, Philippines. I was going home, it was golden hour during that time, when I saw the ongoing construction nearby. I took several snaps and luckily I got one with a flock of birds passing by."

Susan Cook: "Early last spring, after cutting my hair, I decided to put the trimmings out for the birds in the garden busily collecting supplies and building their nests. This little robin seemed very taken with my offering, and flew down many times to fill her beak. Later, come autumn, I found her nest, hidden in some ivy. It was completely and cosily lined with my white hair."

Paul Crotty: "Caution: May Contain Nuts. It's amazing the fun to be had using a few bits and pieces found lying around in the garage."

Janice McMurray: "This busy beaver climbed a steep bank, crossed the road and climbed another steep incline to identify the perfect sapling for their current project... The craftsmanship displayed was exceptional and I am sure that this construction project will come in on time and on budget."

Derek Wilcock: "During lockdown I discovered this hardworking couple mining avocado for me. I was very grateful."

The pictures will be published later that week and you will be able to find them, along with other galleries, on the In Pictures section of the BBC News website.

You can upload your entries on this page or email them to yourpics@bbc.co.uk.

All photographs subject to copyright.