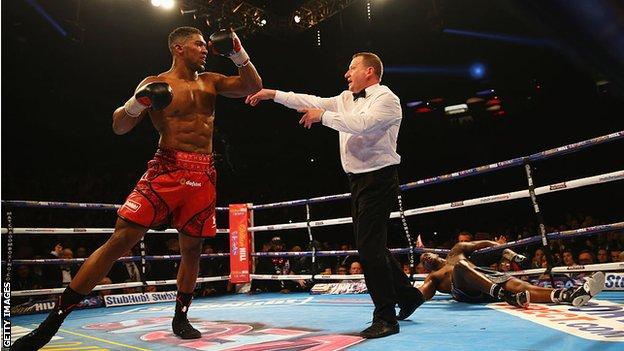 Getting knocked out by your most-hated rival has got to hurt, even for a man as unshakeable as heavyweight contender Dillian Whyte.

When Anthony Joshua stopped Whyte in the seventh round of their bitterly contested bout in 2015, it could have sent the then prospect down a different path, certainly not towards being the headline act alongside Tyson Fury at a sold-out Wembley Stadium on Saturday night.

"You think about the AJ fight, he was knocked out in that fight, hanging over that bottom rope - you would never think that man would come back to do what he has," Dave Coldwell tells BBC Sport.

Coldwell, best known for coaching Tony Bellew to world title glory, has cornered Whyte in the past.

Whyte is now a regular on pay-per-view, a heavyweight attraction in a UK scene where genuine big-draw stars are a rarity. He has picked himself up from two major losses in his career, to Joshua and then Russian Alexander Povetkin, and has improved steadily with every appearance in the ring.

He challenges for his first world title against Fury.

"Dillian is a throwback fighter," Coldwell says. "He looks at defeat as part of a process. As long as you're still ambitious, still working hard, then the results will come. That's how Dillian's improved and become a better fighter.

"A lot of modern fighters, they lose a fight and they lose their self-belief. They lower their sights, change their goals, because they don't believe they'll be the fighter they once thought they would be."

Joshua delivered a brutal knockout of his rival Whyte in 2015

Whyte was 27 and 16-0 at the time of the Joshua defeat. His bitter rival continued his remarkable ascent to becoming a two-time world champion, while Whyte was tasked with starting all over again.

And start again he did, mostly alongside long-time coach Mark Tibbs. Tibbs guided Whyte to 11 straight wins after his loss to Joshua before the Bodysnatcher linked up with coaches Xavier Miller and Harold Knight.

"Dillian wiped himself down after the AJ loss, got on with the job and looked to ways to improve," Coldwell says.

"He's never coasted. He's chased that WBC mandatory position and while he's been mandatory for years he's taken some great fights that have added to his experience, boxing knowledge and ring general-ship. He understands the game more."

"I've come to leave it all on the line. I'm used to taking risks and taking chances is nothing to me," Whyte says. "I've had a lot of different fights in different places and fights where I've been the underdog. I've been through the mill already."

Others have taken note, with Fury's trainer, SugarHill Steward, admitting Whyte has steadily become a major threat in the division.

"I think Dillian has grown a lot," he says. "I see Dillian Whyte's jab has got a lot better. I'm aware of that and working with Tyson on that."

"He's not a special talent of a fighter, but he's consistent with pressure and comes with a lot of power. You always have to watch out for Dillian. He can surprise people."

What are Fury's team prepared for? 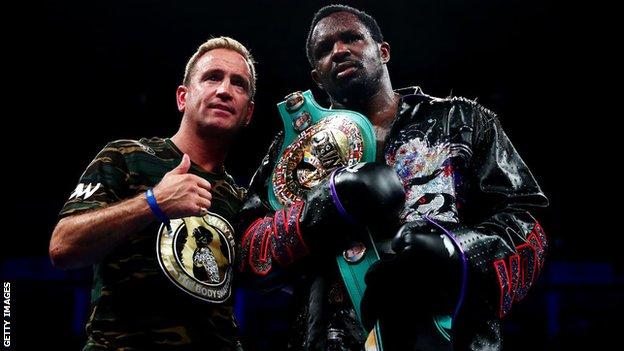 Although Whyte might be a formidable opponent, the general consensus appears to be that Fury has the ability to school his domestic rival.

The odds might be in Fury's favour, but Steward says they have prepared for an opponent eager to impose himself.

"I believe it's Dillian's strength and his build that makes him dangerous," Steward says.

"He's a strong man. He can get close to anybody. You have to try to keep your distance but he gets close to everybody. It's not like he can't do it, he can do it.

"He's got a good jab to get close to anyone. He's strong on the inside too. When he's close, he's strong and that's how he catches everybody, on the inside with a big shot.

"We can show more of who Tyson Fury really is."

Whyte can win 'shootout' with Fury 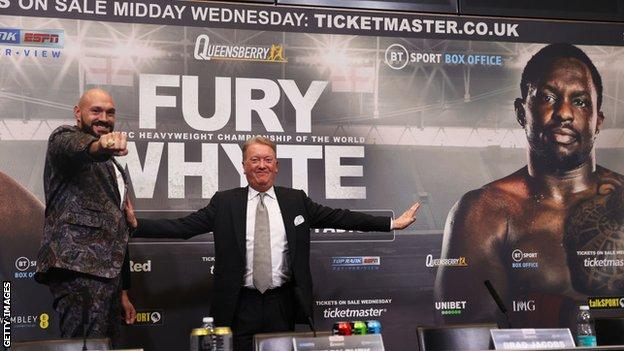 Fury is undefeated in 32 fights. Three fights with Deontay Wilder saw 'the Gypsy King' show almost every side of himself, from the agile boxer to the knockout artist to the brawler.

But Coldwell thinks that although Fury is unbeaten, he has not always looked unbeatable.

"Tyson looked fantastic in the second fight with Wilder, but the third fight technically he looked terrible," he explains. "If Dillian can drag him into that kind of fight then it's a shootout. You don't know who's going to win in a shootout."

Whyte, who was able to avenge the second loss of his career to Povetkin in his last fight in March 2021, insists Fury is not as special as advertised.

"He's a very good fighter. He's the only one of our era who's won all the titles - he's a top fighter, undefeated, big guy, but I don't see him like everyone else sees him, like he's the white 6ft 9in Muhammad Ali, Mike Tyson, Joe Frazier mix that's reborn - I don't see him as that," he says.

Though Coldwell is leaning towards a win for Fury, the British coach says Whyte has the tools to stop Fury.

"Dillian's not going to go out there and outbox Tyson Fury," Coldwell says.

"But his feet have got to be in range and that's where the trickiness of the fight lies. It's all about whether he can get his feet into range and if he can't then this is a very tough ask."