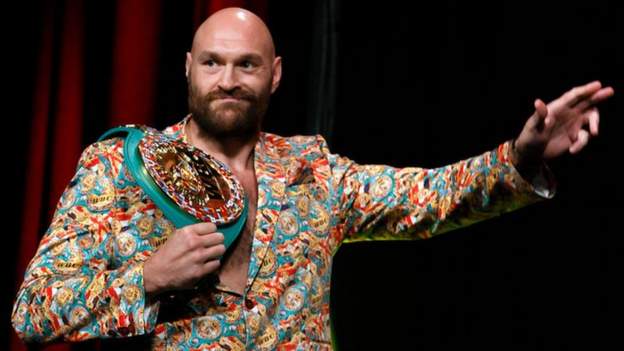 On Saturday, Britain's Tyson Fury fights American Deontay Wilder for the third time, with the WBC heavyweight championship on the line.

The fight in Las Vegas comes after their first bout in December 2018 ended in a controversial draw, before Fury won the rematch in February 2020 with a seventh-round stoppage.

So, can Fury gain another victory, or will Wilder exact his revenge? We have asked some big names from the world of boxing for their thoughts on the big fight.

It is expected to start at 04:00 BST on Sunday and there will be live text commentary on the BBC Sport website.

Two-time world heavyweight champion Anthony Joshua: "Let's go with Wilder because he seems obsessed, like he really wants it. A focused man is a dangerous man, and he's focused. Wilder might get the decision. Actually, no... it has to be a knockout. One of them will knock the other out."

Fury's trainer SugarHill Steward: "It's going to be a knockout. Tyson knocks Wilder out. That's what I believed last time and he'll do it again this time, just in a more electrifying fashion. Everything we've been doing, he's got better. He's learning new things and the object and the goal is to get better. That's for me and Tyson. I wanted to make Tyson Fury the best Tyson Fury. The things we've been working on have him on the road to being the best."

Fury's co-promoter Frank Warren: "Wilder will go in seven rounds. If Tyson catches him early, he could go easily. But if he's there after seven rounds I'd be surprised."

Lennox Lewis, former undisputed heavyweight world champion : "I'm a bad predictor. It is going to be a fantastic fight. Tyson Fury has a lot more tools and weapons that he can use. If Deontay went back and learned a couple of tricks he can put to use he'll have a good time in there as well. So all around it is going to be a good fight."

British heavyweight Dillian Whyte: "The smart money would pick Tyson Fury to win again, but something inside of me is saying Wilder might spring a surprise on us."

Super-middleweight Anthony Fowler, who fights Liam Smith in Liverpool on Saturday: "Fury has got Wilder's number - he's a bigger, stronger man. Fury's outboxed him and outbrawned him as well. I can't see Wilder winning, Fury is too good."

Tyson Fury will 'go down as one of Britain's greatest' if he beats Wilder, Joshua Usyk

Anthony Joshua's promoter Eddie Hearn: "Fury is a huge favourite but Wilder has the ability to end a fight at any time. It's heavyweight boxing and that's why it is so exciting. Fury wins on points."

Steve Egan, who trained Fury when he was an amateur: "Tyson definitely wins. But maybe go to eight or nine. I don't think it will go all the way. He'll definitely finish him. Wilder will punch himself out, being frustrated."

UFC fighter Molly McCann: "Tyson does it in six."

British heavyweight David Price, who announced his retirement this week: "I'm going to go with another Fury win again. I think it'll be a sustained beating. I think Wilder will start quick and then Fury will just take over in the mid to late rounds and stop him."

BBC Radio 5 Live analyst Steve Bunce: "My prediction changed - I fancied Tyson, but having seen him I'm absolutely convinced. I think we get a repeat. Almost a punch-for-punch, round-for-round repeat of what we had last February."

Wilder's trainer Malik Scott: "Is every mistake gone? Absolutely not, but we've prepared him enough to be very surgical and patient, and he can knock Fury out within five rounds, with the pace we've set him out. I believe Tyson Fury takes his opponents for granted between three and six rounds, and Deontay will make him pay. We'll see if Fury can handle this onslaught."

Wilder's manager Shelly Finkel: "Deontay's dream is to get this match. I don't usually act arrogant, but I do believe Deontay is going to knock him out this time."

WBA, IBF and WBO heavyweight champion Oleksandr Usyk: "I don't think too much about who wins. It will be a good fight. Don't write Deontay Wilder off since he always has the knockout punch. I am not good at making predictions."