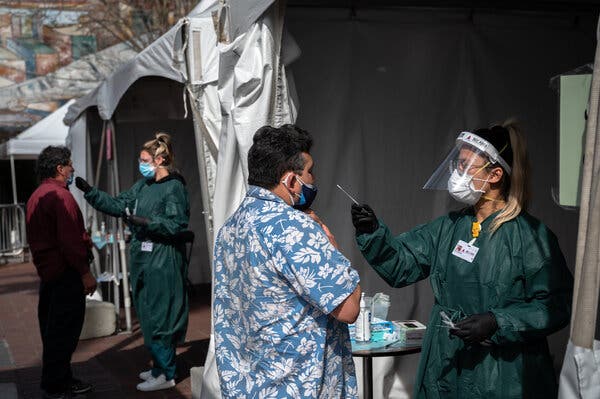 The Morning Newsletter Covid-19 testing is on the decline

. That’s a problem. A testing site in San Francisco this month. Credit... Mike Kai Chen for The New York Times March 26, 2021 Get The Morning by email: Make sense of the day's news and ideas with this daily newsletter. A few weeks ago, Citigroup began providing at-home Covid-19 testing kits to many of its workers in Chicago and New York. Each kit includes a nasal swab, a paper strip and a liquid solution, and people get a result within minutes. “It looks a little like a pregnancy test,” Dr. Lori Zimmerman, Citigroup’s medical director, told me. The company is distributing enough tests for employees to take them three times per week, typically on Monday, Wednesday and Friday mornings. Soon, Citigroup will expand the program to 6,000 more employees nationwide. The goal, Zimmerman said, is to help people learn that they have Covid before they can infect colleagues or customers. This is the kind of ambitious testing program that many medical experts believe should be available across the country. Why? Even as more Americans are receiving vaccine shots, the country remains months away from vaccination being the norm. In the meantime, wide-scale testing can allow life to begin returning to normal — without setting off deadly new Covid outbreaks. Unfortunately, the U.S. is going in the opposite direction on testing. The number of daily tests has declined 35 percent since mid-January: Image Credit.. 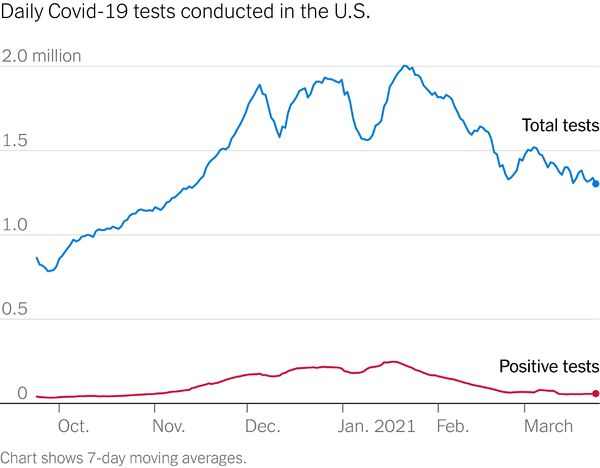 . By The New York Times Source: Johns Hopkins Coronavirus Resource Center “We have to do more,” Jennifer Nuzzo, an epidemiologist at Johns Hopkins University, told me. “This pandemic is not over. We still have dangerously high levels.” ‘It pays for itself’ Testing has declined partly because the health care system has instead focused on giving vaccine shots. And vaccinations are indeed more important than Covid tests. But the country should not have to choose between the two, experts say. If the U.S. can accelerate both vaccinations and testing, the payoff would be huge, in terms of lives saved and schools and businesses reopened. “It pays for itself,” Dr. Michael Mina, a Harvard University epidemiologist who has argued for more testing, said. “Tests are one of the easiest, least burdensome things we could do.” For Monica Jurado, a Citi personal banker on the South Side of Chicago, testing has become a simple part of her morning ritual. After taking a test, she gets ready for work — and, 20 minutes later, she can see the test result. “It gives me tremendous peace of mind knowing that I am coming to work safe, and so are my co-workers,” Jurado said. Worldwide, several countries, including Australia and South Korea, have already used mass testing to hold down Covid cases, as Vox’s Umair Irfan notes. Many colleges in the U.S., as well as pro sports leagues, have also relied on testing to continue operating. And Biden administration officials say they are committed to making tests more available, including for people who show no symptoms. “Testing is a major pillar of the president’s strategy,” Carole Johnson, the White House’s testing coordinator, told me yesterday. 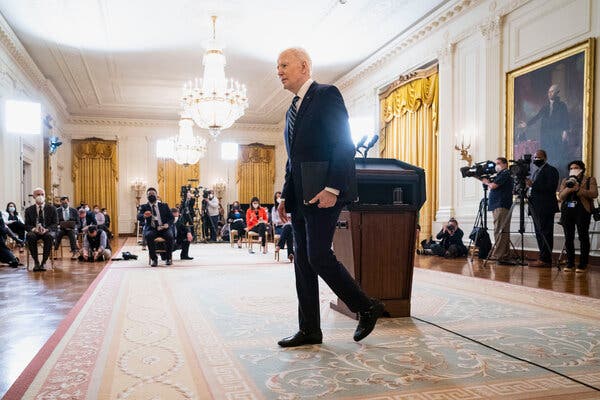 .” So what will it take for the U.S. to do more testing? Three steps for more tests Money. The recently passed virus-relief law includes $50 billion for expanded testing, including $10 billion for schools. That will help, experts say, although it’s not yet clear how much. The tests that Citigroup is giving cost about $5 each, when bought in large quantities. A nationwide program of universal mass testing for unvaccinated people would probably cost a few billion dollars a week — which, again, pales compared with the cost of extended shutdowns. The country’s current testing plan is much less aggressive. Logistical help. With many hospitals and pharmacies focused on vaccinations, people need places to get tested. The Biden administration is working with state and local officials to open four regional coordinating centers in coming weeks. Corporate America can play a role, as well. Large Canadian companies recently created a consortium to give rapid-result tests to employees, and the group’s organizers announced this week that they planned to expand into the U.S. F.D.A. approval. Citigroup has been able to distribute its tests — which are known as rapid antigen tests — only because it is doing so as part of an academic study; the Food Drug Administration has not approved the tests Citigroup is using. The agency has approved two other at-home antigen tests, but they are not yet widely available. One issue is that rapid-antigen tests are slightly less accurate — missing some people who have Covid — than the other main type of test, which is known as a P. 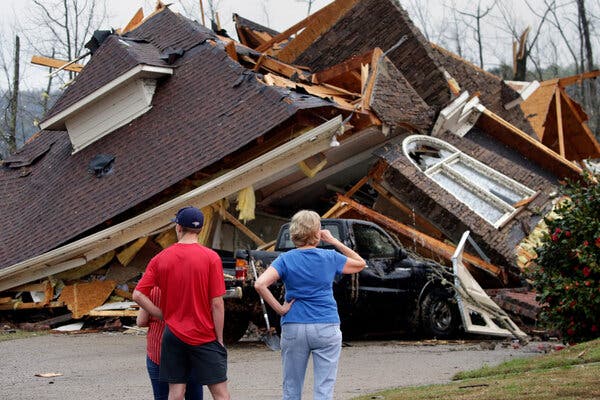 .R. test and isn’t an option for mass home testing. But that’s OK. Think of it this way: Citigroup is detecting many more Covid cases than most employers are. The bottom line In President Biden’s first two months in office, his administration has made impressive progress in increasing the pace of vaccinations. But he still faces two overriding Covid challenges, in order to prevent thousands of needless deaths. First, he needs to accelerate vaccinations further — to match the rate at which pharmaceutical companies are delivering shots. (The new goal Biden announced yesterday — to hit 200 million vaccinations in his first 100 days — is not ambitious enough to get there). Second, the administration will have to find a way to reverse the recent decline in testing. A programming note : I will be on break next week, and my colleagues will be delivering The Morning to your inbox. I’ll be back Tuesday, April 6. THE LATEST NEWS Biden’s News Conference Image Biden held his first official news conference as president in the White House yesterday. Credit... Doug Mills/The New York Times Image A home destroyed by a tornado in Alabama yesterday. Credit... Butch Dill/Associated Press Image Nyx Nocturne at Branded Saloon in Brooklyn. Credit. 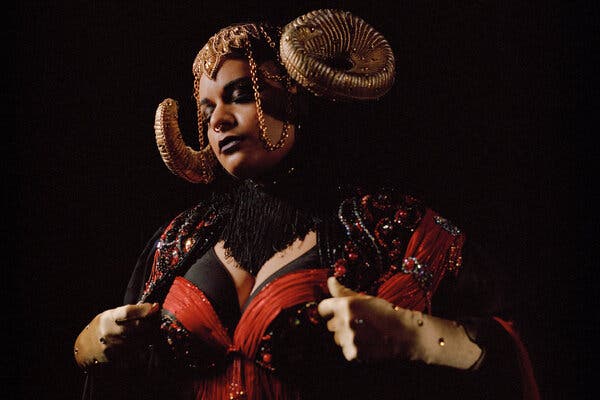 .. Kholood Eid for The New York Times Closed, for now: “The gasps, the laughter, the whistles, the ‘Yeah, baby!’s and the applause”: what New York’s burlesque performers are missing. Modern Love: She tried to keep her expectations in check. Would that make it hurt less? Lives Lived: Jessica Walter’s acting career included roles on Broadway and an Emmy-winning turn on the 1970s show “Amy Prentiss.” But she may be best known as the martini-swilling matriarch of the Bluth family on “Arrested Development.” Walter died at 80. ARTS AND IDEAS How do you complete Mozart? It’s hard to imagine a more intimidating task for a musician than completing an unfinished work by Mozart. That’s what Timothy Jones, a Mozart expert who teaches at the Royal Academy of Music in London, has done, completing violin sonata fragments that the composer left behind. Posthumous completions aren’t uncommon in classical music. But Jones’s latest effort comes with a twist: He made multiple completed versions of each fragment, each emphasizing different aspects of Mozart’s style. He also benefited from recent research that helped put a more accurate date on Mozart’s compositions. “Having a precise sense of the context for these fragments is what let me ask detailed hypothetical questions about what his compositional strategy might have been,” Jones told The Times. “What was he working on, listening to, his compositional interests? That was key, because his style is still evolving really quite fast up until he died, in 1791.” PLAY, WATCH, EAT What to Cook Image Credit... Heami Lee for The New York Times. Food stylist: Maggie Ruggiero. Prop stylist: Rebecca Bartoshesky. Image The pangrams from yesterday’s Spelling Bee were awakening, wakening and weakening. Here is today’s puzzle — or you can play online. 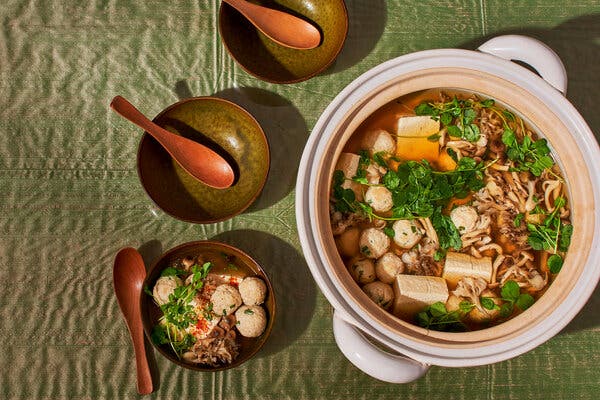 . If you’re in the mood to play more, find all our games here. Thanks for spending part of your morning with The Times. I’m off next week. My colleagues will arrive in your inbox while I’m gone. — David P.S. Apoorva Mandavilli, a Times science reporter, has a master’s degree in biochemistry, speaks seven languages and has a weakness for “Bridgerton.” In a Q. A., she talks about covering the pandemic. We use cookies and similar methods to recognize visitors and remember their preferences. We also use them to measure ad campaign effectiveness, target ads and analyze site traffic. To learn more about these methods, including how to disable them, view our Cookie Policy. Starting on July 20, 2020 we will show you ads we think are relevant to your interests, based on the kinds of content you access in our Services. You can object. For more info, see our privacy policy. By tapping ‘accept,’ you consent to the use of these methods by us and third parties. You can always change your tracker preferences by visiting our Cookie Policy. Something went wrong. Please try again later.