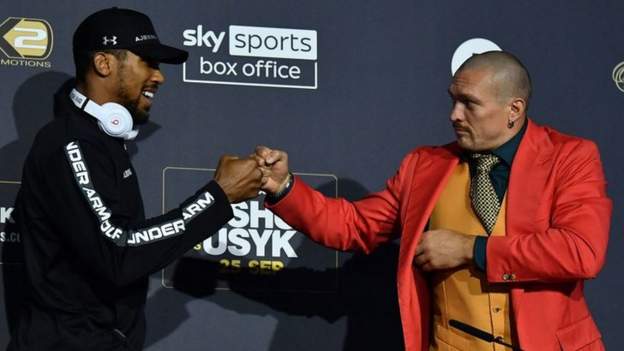 Joshua, 31, needs to win to keep alive the prospect of becoming the undisputed heavyweight champion but faces a tough challenge against Ukrainian Usyk, who has previously held all the belts at cruiserweight.

A crowd of 67,000 is expected and the fight will be broadcast on BBC Radio 5 Live from 22:00 BST, while the BBC Sport website will have a live text commentary page from 20:00 BST with all the build-up.

We have asked big names from the world of boxing and one from football for their opinion on the big fight:

WBC heavyweight champion Tyson Fury, who may face the winner next: "I'd much prefer to beat Joshua up, it's a bigger fight and people want to see it more. He's got a tough fight, you know?

"Usyk is no mug. People say to me, 'He's too small' and this and that but the guy is bigger than Muhammad Ali, he's bigger than Mike Tyson and he's bigger than Holyfield. He's definitely a good fighter. If he [Usyk] does [win] then he will cost us a few quid."

Former European heavyweight champion Derek Chisora, who lost to Usyk in 2020: "One thing AJ has that Usyk doesn't is the knockout punch. It might take six rounds, seven rounds, but I can guarantee you Usyk will get laid out. AJ will get to him."

WBO cruiserweight champion Lawrence Okolie: "I'd like to believe AJ wins within eight to 10 [rounds]. Usyk has the skills to go fully defensive, but he will come to win the fight and will come unstuck."

Heavyweight Dillian Whyte, who lost to Joshua in 2015: "It's a great fight and Joshua will stop him in the first six or seven rounds. Usyk will start fast and Joshua should be cagey as Usyk is a bit lighter.

"Joshua can sometimes lack confidence but hopefully he goes back to the old him, starts pressing, being the bigger, stronger guy and gets the job done early. If Joshua sets the pace, he can get an early knockout and if he is strong, confident and walks him down, then I don't see Usyk's punches troubling Joshua."

Former super-middleweight world champion George Groves: "If I was Joshua, I would take control of the ring and try to dominate and bully off the front foot. Usyk will want to be off the back foot for the first couple of rounds, then try to pepper Joshua.

"If I was in the Joshua camp, I would say: 'You want to keep this guy in his box. You don't want Usyk having any confidence, so hit him hard and early. In the first three rounds, you want to land something big on him.'" 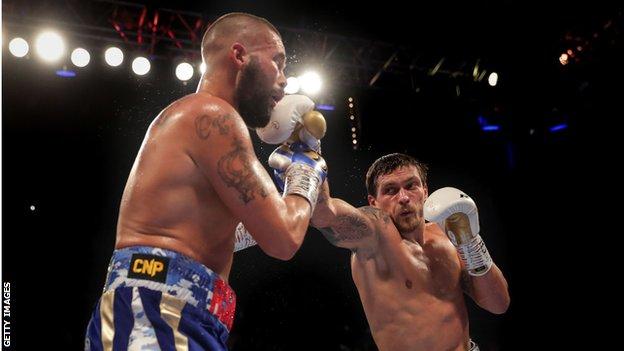 Oleksandr Usyk has won all 18 of his professional fights, including victories over Britons Tony Bellew and Derek Chisora

Joshua's promoter Eddie Hearn: "I quite fancy an early one - it'd be nice. I don't want to be biting my fingernails, sitting there scoring it with my old man for four or five rounds. Let's just have a nice early one. Little shot, Charles Martin style, sit back, right hand to the southpaw down the pipe."

Tyson Fury's co-promoter Frank Warren: "Joshua looks a bit slimmer - he's going for speed. He's got to be more mobile against Usyk. He should win this fight. He should be too big and too strong for a fella that is really a cruiserweight.

"I know he's come up to heavyweight, but he's in his early thirties and could probably still make cruiserweight if he wanted to. But, it's going to be interesting to see if he can get rid of him.

"If Usyk is still there after six rounds I think he'll give AJ a problem. If he's still there at the end then I can see him winning it on points. To be there he'd have to outbox him. I think AJ is gun shy now."

Lightweight boxer Campbell Hatton: "It's another top fight I am on the undercard of. Usyk is a top fighter and going to cause absolute nightmares early. I just think AJ's skills are underrated.

"He's not just a big puncher, he's technically spot on as well. It might take him a few rounds to get to Usyk with him being so technically good, but when he does he'll flatten him.

"He's going for that speed and that'll suit him. Whereas Usyk seems to be going for putting size on and that's the wrong way to go. Once AJ starts landing the size will be too much of a difference and he'll take him out."

Former England defender Micah Richards: "Usyk will be better than people give him credit for, but Joshua will win this one. The one we really want to see is Joshua-Fury, so get past Usyk and we can settle for a great fight."

If you are viewing this page on the BBC News app please click here to vote.