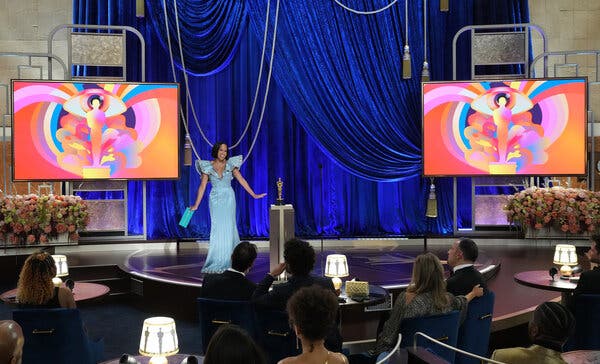 A stripped-down ceremony stripped out too much of what makes the show, for better or worse, worth watching

. Regina King opened the 93rd Academy Awards with a long stroll through Los Angeles’s Union Station. Credit... ABC April 25, 2021 The producers of the 2021 Oscars had said that they planned to make the annual telecast more like a film. They didn’t succeed at that, but they did change things up. Sunday’s broadcast on ABC was more like a cross between the Golden Globes and the closing-night banquet of a long, exhausting convention. The challenges were great. The ceremony had to celebrate an industry that was already going through wrenching change before the pandemic brought it completely to its knees. And it had to do it in a Covid-19-safe manner (while continually pointing out that it was doing so). The solutions the producers Jesse Collins, Stacey Sher and Steven Soderbergh came up with included moving the ceremony from the crowded seats of the Dolby Theater to a tiered stage constructed in Los Angeles’s Union Station, where nominees and a few invited, vaccinated guests sat maskless at widely spaced tables. Winners walked a few steps and up a treacherous ramp to a small dais; presenters (the show was hostless for the third straight year) often spoke from among the nominees. There were charms to this arrangement. It was a nice change to see the nominees with a few people they actually cared about (or felt absolutely obligated to invite), rather than the largely anonymous studio-invited claques we’re used to. Image Signs of the pandemic’s impact could be seen in the widely spaced tables and the fact that the Oscars were being held in a train station. Credit... ABC The trade-off — whether because of the smaller crowd, the social distancing, or the sound quality in the cavernous space — was what felt like a dead room, both acoustically and emotionally. There were powerful and moving speeches, but they didn’t seem to be generating much excitement, and when the people in the room aren’t excited, it’s hard to get excited at home. The other major change in the production — and this one couldn’t be entirely explained by pandemic adjustments — was that the acceptance speeches were just about the only thing to watch. Through much of the evening, nearly all of the connective tissue that usually provides diversion and entertainment was stripped out: jokes, sketches, insults, patter, songs, clips montages from the best-picture nominees. (Questlove and Lil Rel Howery’s karaoke song-trivia bit was the horrible exception that proved the rule.) One result seemed to be longer acceptance speeches, with no orchestra to play the winners off, though that might have been a collateral effect of the general flatness. What really grew, though, was scripted filler — or, as the producers would have it, storytelling. In many categories the presenters were forced to recite anecdotes about each nominee, generally on the theme of movie love, perhaps a result of the cineaste Soderbergh’s influence. These stories about seeing “Jaws” or some other classic for the first time were an inconsequential drone that made “And the Oscar goes to” feel anticlimactic. The changes, however necessary, were a reminder of how the rituals of the Oscars, no matter how lame and formulaic, are a crucial part of its appeal — the mixture of performative glamour with the klutzy, mortifying atmosphere of a high school dance. The producers appeared to have had one actual idea about how to enliven the show: It opened with a caper-movie-style sequence — reminiscent of Soderbergh’s “Oceans” films — in which a camera tracked Regina King from behind as she walked through the Union Station lobby carrying an Oscar as if it were the Maltese falcon, holding contraband or microfilm. 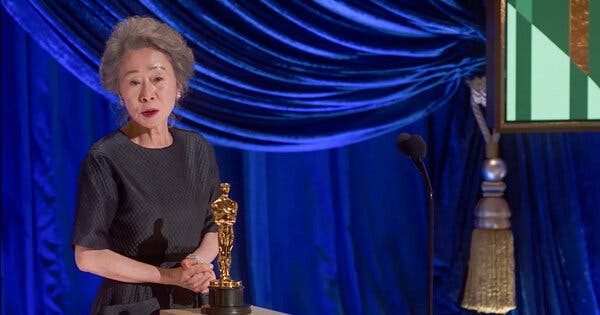 It was a promising start, and King’s immediate invocation of the Derek Chauvin verdict earlier in the week felt right for a ceremony with an unprecedented number of artists of color among its nominees

. (Her appearance a few hours later in an Escalade commercial offered a little cognitive dissonance.) But her abbreviated introduction was indicative of the stripped-down, steam-table nature of the show to come. As the show, despite dropping so much of its usual fiber, dragged on, the treasured “in memoriam” montage was hurried onscreen eight minutes before the broadcast’s scheduled end, with an introduction that wrapped together pandemic deaths and police killings in a generalized invocation of grief. Then came the night’s one big surprise, the move of the best-picture presentation ahead of best actor and actress. It stole some thunder from the expected victory of “Nomadland,” though the film’s star, Frances McDormand, tried to make up for it with some impromptu howling. Image Yuh-Jung Youn, the supporting-actress winner for “Minari,” gave another charming acceptance speech. Credit... ABC The winners did their best to give the show some human feeling. Mia Neal, accepting the hair and makeup award for “Ma Rainey’s Black Bottom,” recalled her grandfather’s experience of racism in a speech that was a model of force and economy. Thomas Vinterberg, the directing and international-film winner for “Another Round,” gave a heartbreaking salute to his daughter, Ida, who was killed in an auto accident during filming. Yuh-Jung Youn, the supporting-actress winner for “Minari,” supported her standing as this awards season’s leading humorist. Tyler Perry, prepared to accept the humanitarian award, delivered a rousing plug for tolerance. The victories for “Ma Rainey” (which also won costume design), Youn, the short film “Two Distant Strangers,” the animated feature “Soul,” Daniel Kaluuya as supporting actor in “Judas and the Black Messiah” and Chloé Zhao for directing the best-picture winner “Nomadland” were among the hopeful signs of the Motion Picture Academy’s ability to recognize artists who are not white men and stories that don’t center on white men. For many viewers, that was probably reason enough to enjoy the evening. If you were looking for a real sign of progress, though, it might have been offscreen. Along with the increased presence of women and people of color at Union Station, there was a critical mass this year of (arguably) even better movies by women and people of color that went unrecognized: Channing Godfrey Peoples’s “Miss Juneteenth,” Gina Prince-Bythewood’s “The Old Guard,” Roseanne Liang’s “Shadow in the Cloud,” to mention a few. The more things change, the more they stay the Oscars. We use cookies and similar methods to recognize visitors and remember their preferences. We also use them to measure ad campaign effectiveness, target ads and analyze site traffic. To learn more about these methods, including how to disable them, view our Cookie Policy. Starting on July 20, 2020 we will show you ads we think are relevant to your interests, based on the kinds of content you access in our Services. You can object. For more info, see our privacy policy. By tapping ‘accept,’ you consent to the use of these methods by us and third parties. You can always change your tracker preferences by visiting our Cookie Policy. Something went wrong. Please try again later.