CAMDEN, N.J. — Doc Rivers could double as a stand-up comedian with dry wit if this coaching thing doesn’t work out.

Toronto Raptors coach Nick Nurse wasted no time in setting the agenda for Game 2 of his team’s first-round series against Rivers’ 76ers, claiming MVP candidate Joel Embiid had gotten away with offensive fouls in the 131-111 76ers win.

“We've got to believe that, if we're legal defensively, that they're going to call those," Nurse said Saturday night. “Like, we had a couple of times where we beat him to the spot and he bowled us right over, and they just let him lay it in.

“I don't care if you're 5-foot-11 and 160 pounds, if you beat him to the spot and he runs over, it's a foul. I thought he threw three or four elbows to the face. He got called for one. OK. I mean, we're gonna stand in there. We just need, if we're legal defensively, then we've got to have them called or we don't have a chance, period. Nobody can guard that guy if they're just gonna let him run you over time and time again.” 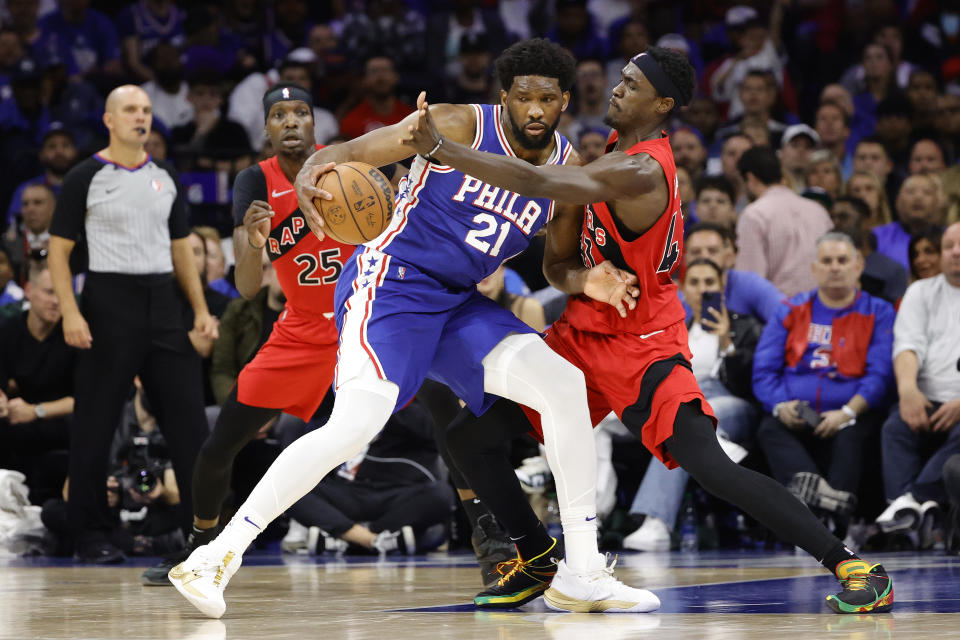 Rivers seemed to know what was coming and initially deadpanned the query at Sunday afternoon’s practice. A few minutes later, when the subject was broached again, Rivers let something slip out.

“I’m not even touching that one,” Rivers said. “I don’t think the officials ever read anything, nor do the league.

“I’ve had my time when I’m complaining so I’m gonna stay out of it.”

It was an answer without giving an answer. Rivers knows the league pays attention to what’s said in news conferences, hence the fines assessed when a player or coach steps out of line. And Nurse wouldn’t have made such an impassioned plea if he didn’t believe it would have a positive effect. It has happened through the years, a little old-fashioned gamesmanship coaches and players have employed to get the NBA’s attention.

Whether it’s actually true or not, the combatants believe it is, so it’ll continue as time goes on.

Fred VanVleet fouled out midway through the fourth quarter, and backup big man Chris Boucher fouled out in 15 minutes. The Raptors were called for 26 fouls to Philadelphia’s 18. Embiid was called for five fouls in 37 minutes.

The 76ers went to the foul line 34 times to the Raptors’ 23, and the tone of defending Embiid was established early. Rivers, of course, would rather the officials stop their whistles.

Nurse would prefer if his undersized players were given more benefit of the doubt, a task made tougher considering rookie standout Scottie Barnes is doubtful for Game 2 with an ankle injury after Embiid inadvertently stepped on his foot.

As Rivers noted, it’s a tactic he’s used so he’s not surprised Nurse went there. And perhaps subtly, he replied in kind — to the league.