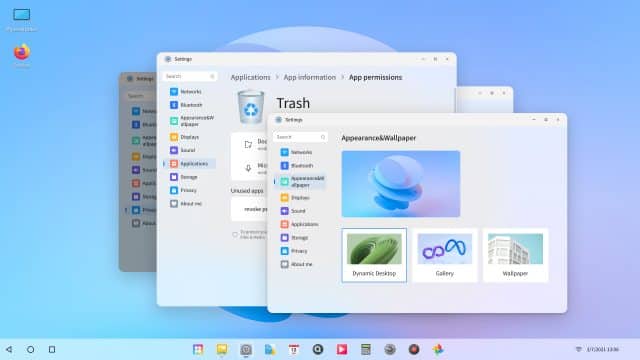 Orange Pi is an affordable alternative to the Raspberry Pi. There are several versions of the open-source computer available, including the recently released Orange Pi 5 and Orange Pi 800, and they can run a choice of operating systems, such as Android, Ubuntu, Debian Image and more.

● Simple design. The Orange Pi (Droid) has a stylish design, with a beautiful boot animation and an elegant, clean desktop. ● Classic Start. The classic Start menu, similar to Windows 11, serves as the entry point for installed applications and system settings. ● Multi-window and multi-tasking. It supports multi-window and multi-tasking operations, and it is easy to switch between applications, greatly improving the efficiency of use and making it more suitable for desktop management. ● File Manager. In the bottom left corner is the directory tree structure, continuing the style of Windows, users can quickly enter the folder to find the corresponding file. ● Settings. Contains Network and Internet, Bluetooth, Desktop and Wallpaper, Display, Sound, Applications, Storage and more. Overall it is simple and functional. ● Security and Privacy. Retains common functions but removes some options that involve user privacy, such as location, phone number, SMS, notifications, etc., respecting security and privacy protection. ● Control Center. Allows you to quickly set up network, Bluetooth, hotspot, screen saver, do-not-disturb mode, wallpaper and more, making it easy for users to turn these features on and off in real time; and to quickly access the settings page via the settings icon in the top right corner. ● Taskbar. The lower taskbar can display up to 10 applications at the same time. ● Task Manager. The list view of the windows is an efficient way to manage your current tasks, which is both beautiful and useful, and allows you to intelligently allocate system resources and close background processes with one click, so you don't have to switch between applications frequently. ● Shortcut keys. Orange Pi OS supports Ctrl+C, Ctrl+V, Ctrl+A and other classic shortcut keys. ● Google Play. The Orange Pi (Droid) comes with Google Play pre-installed, allowing users to download a wide range of Android applications, including games, video, photography, social networking, shopping and more.

Orange Pi OS (Droid) can be downloaded here. You can find out more about Orange Pi (Arch) here.

Source: https://betanews.com/2022/11/23/android-based-orange-pi-os/
We use cookies to ensure that we give you the best experience on our website. If you continue to use this site we will assume that you are happy with it. Ok
95ab616d7ed3755e887c0c8abd77dfdd0fef68b0